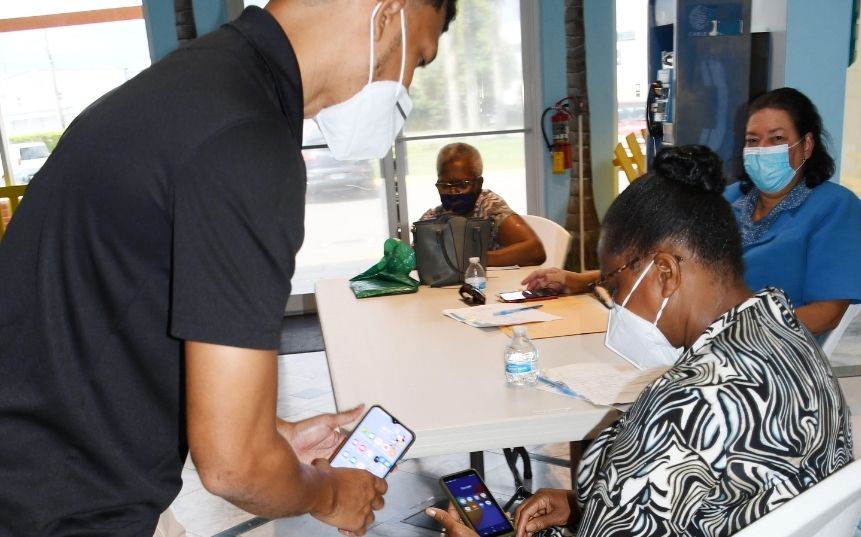 According to DCFS, the OPM theme this year is “Digital equity for all ages – Connect / Create / Contribute. DCFS said it was one of 12 workshops facilitated by a local media company and the session familiarized participants with the following:

All participants brought their smartphones and tablets for the 90-minute session.

DCFS stated that aAccording to Trifecta Films co-founder Jonathan Webster, the attendees weren’t the only ones to learn from the lessons.

Technology is here to stay and is becoming an increasingly central part of our lives. The facilitation of these courses showed us that older people are often very eager to learn the basics of using smartphones. They often just need help understanding how features can be used to simplify some aspect of their daily life.

Carvin Forbes, of Bodden Town East, and the only man in the class said:

I went to the first class and learned a lot about using smartphones. I then spent hours going through the icons one by one before deciding to come back for more.

DCFS said that after explaining a feature, pairing the smartphone with the TV screen, the workshop facilitators gave individual mini tutorials and answered questions on an individual basis.

DCFS said attendees especially enjoyed learning how to set their world clocks to the local time in countries where loved ones live and to create WhatsApp groups for emergency communications during storms.

I need to know my phone and really believe you’re never too old to learn.

DCFS said that in order to register (space is limited to 12 people) members of the public should contact the following: